Cop Tracks Down Good Samaritan Who Shielded Elderly Woman from Rain and Treats Him to Dinner
By Amanda Thomason
Published September 6, 2019 at 8:59am 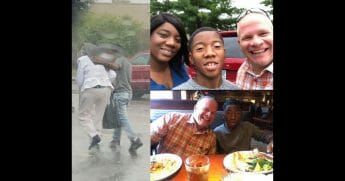 In a world where it can seem like no good deed goes unpunished, this tale of a cop and a young man is refreshing and heartwarming.

When Officer Joe Holt with the Independence Police Department in Independence, Missouri, was looking for some food one day, he spotted something else that surprised and encouraged him.

There in a grocery store parking lot, in the middle of a heavy downpour, was a young black man holding his jacket over an elderly woman, ushering her to her vehicle as she carried her groceries.

“So today I experienced something that actually set me back a little,” Holt shared through a post by the police department. “It didn’t set me back because i was shocked but because I got to witness it first hand.”

“With all the hate fueled by color, belief, sexual preference or race it actually pisses me off. Why, because most of it is based off what they read in the papers. Most isn’t based-off personal experiences.”

“This young black male (teen) exited the backseat of a van he was in while it was pouring rain took his coat off and protected this elderly white female from the environment the best he could all the way to her car. He then walked back to his car all while not saying a word to his Auntie or Mom when he exited or re-entered.”

Holt felt compelled to recognize the young man’s chivalry, so he approached the vehicle he’d gotten into. The driver, his mother, was understandably nervous when she saw the cop coming up to her window.

But when she heard the words of praise coming from Holt, who recognized her excellent parenting and that her son was going places, she started to cry.

“This kid cared less about race, religion or color,” Holt continued. “The only thing this kid cared about was being kind.”

The reason Holt shared the story was not only because it so moved him, but because he was hoping to get back in contact with the young man. He promised the do-gooder that if he could get back in touch, he’d take him out for dinner and would be available if he ever needed help.

The young man’s actions may not seem earth-shattering, but they were rooted in kindness, and even a little kindness goes a long way.

Not only was a woman helped, a bystander touched and a mother’s heart warmed, but thousands of people have also been blessed by this small story of gentleness in an often harsh world.

Much to Holt’s delight, he managed to get back in touch with the teen, and held to his promise.

“We are pleased to announce that Officer Holt was able to find the young man, identified as 14 year old Tyrea, who he witnessed take off his coat to help an elderly lady in a parking lot during a rain storm last week,” the Independence Police Department shared.

“Fortunately, a family member saw the viral story and called the police department. Officer Holt met up with him and his mother over the weekend and took them both out to dinner.”

“Officer Holt said ‘Well this kiddo who I have only known a short time already means the world to me. As promised after finding him I took him out to dinner. He and his wonderful mom Ebony enjoyed some Red Lobster.’”

While it’s important to see examples of do-gooders in this world, it’s better to both recognize those people and emulate them — that’s how chains of pay-it-forward and acts of kindness keep on keepin’ on.

Holt and Tyrea are a great example of this pattern, and both of their lives seem better for it.

We are committed to truth and accuracy in all of our journalism. Read our editorial standards.