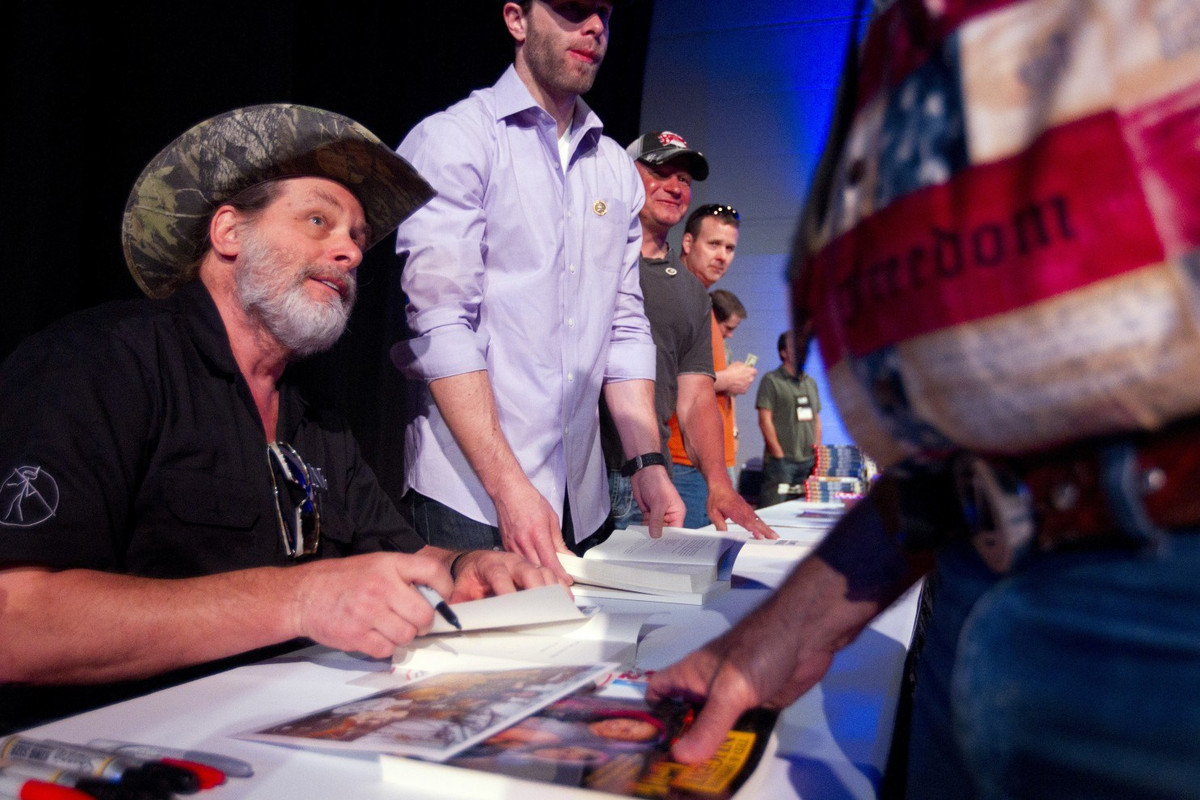 Ted Nugent Concert Protested, Boycott Called For
https://bearingarms.com/tom-k/2018/07/03/ted-nugent-concert-protested-boycott-called/
Posted at 10:00 am on July 3, 2018 by Tom Knighton

Ted Nugent is someone that doesn’t back down. An avid shooter and hunter for years, the rock legend has maintained his position in the face of opposition for years now.

Once upon a time, that was something that would earn respect from people. After all, standing up for what you believe in when people were shouting you down was a noble thing.

Today, it earns you a protest.

A rolling billboard with Ted Nugent’s face on the side isn’t promoting his Roanoke concert later this month. It is protesting his appearance at the Berglund Center.

Andy Parker is the father of Alison Parker, our WDBJ7 colleague who was shot and killed in 2015.

He organized the protest against the conservative rocker and NRA board member, and is calling for a boycott of the Berglund Center, because of Nugent’s statements on gun rights and gun control, and what Parker describes as his vile behavior.

“It’s an outrage to me and the people of Roanoke who think this community deserves better,” Parker said during a news conference Monday afternoon.

The general manager of the Berglund Center pointed out that as a public facility, they can’t discriminate against someone because they espouse certain views.

That’s absolutely true. Frankly, though, it’s troubling that their sole point of issue with Nugent is that he’s pro-gun. I mean, they’re not even channeling the 1980’s claim of moral rot through rock music. They’re just taking issue with his political position on the right to keep and bear arms.

And someone tried to tell me there was no effort to stigmatize gun owners.

Nugent is loud, and anti-gunners find him obnoxious, but there used to be a time when that was tolerated unless there was something particularly egregious in recent history like an out-of-line comment. Then there would be protests, calls for boycotts, etc., and then everything would be a return to normal after a time, and all would be well.

But now, Nugent is being targeted simply for espousing the wrong opinion. He won’t go meekly into a corner and shut up about his right to keep and bear arms and let others tell him how to think, so now he’s unworthy of even holding a concert in their community. Talk about elitism.

The Berglund Center isn’t backing down, thankfully, and from what I know about Nugent, an angry mob isn’t likely to scare him, so it’s not like anything will happen.

However, isn’t it interesting that Alyssa Milano gets to be thought of as brave for her anti-gun stance, despite her entire industry sharing her views, but Nugent is supposed to sit down, shut up, and listen to his supposed betters? Funny how that double standard seems to be in play, isn’t it?

At least Nugent knows what the hell he’s talking about when he discusses guns. That alone should elevate his status, but with our mainstream media, what do you expect?

I expect Nugent’s concert to go off without a hitch. I think Mr. Parker will need to come to terms with his daughter’s murder in some other way because it wasn’t the gun’s fault then. It was the jerkwad who used the gun, and the sooner he comes to terms with that, the easier it will be for him to not act like a bitter, angry man.